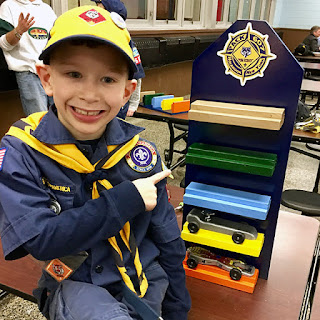 So a few months back I was toying with the idea of building a Pinewood Derby Display Shelf.  My thinking was that it should hold a car for each year of the Cub Scout Experience.  I looked all over online and finally found something that I really liked, the problem was the cost, at $30 each it just wasn't a feasible den project, plus they seemed to no longer be available. 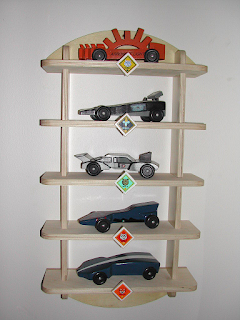 One of the dens in our pack builds an individual stand each year for that year's car, and that's great, but who has space for 5 stands, I wanted something that could hold all 5 cars either sitting on a dresser or hanging on the wall.  I also wanted a project that they'd do as Tigers or Wolves so they'd have empty shelves they were eager to fill, a project that can double as a retention tool seemed like a good idea.  As a child lays in bed contemplating if they want to continue on in scouting I want those empty shelves to remind them they still have more cars to build.

Below is the prototype I made up with some scraps I had lying around my makeshift shop.  It was only 3 cars high but it allowed me to come up with some general dimensions to create my design. 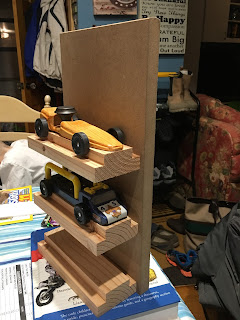 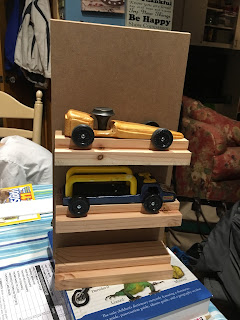 So I figured out my ideal dimensions, and then spent a few hours on-line and in-store at the local home centers deciding on what materials would work best at the lowest cost and developing my materials list for screws, paint, etc.  I need materials for 9 finished projects.  The cost per project worked out to be just under $10. 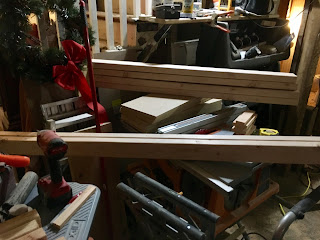 What I ended up with were four 8' long kiln dried 2x4's and two 2'x4' sheets of 1/2" MDF.  If I were making any more than 10 it would pay to get a full 4'x8' sheet but that would have required using the truck and moving the saw outside to rip down, so I'm glad I only needed 9. 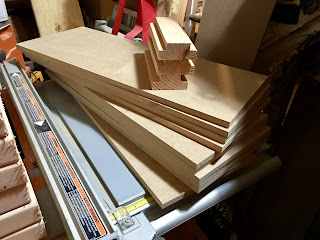 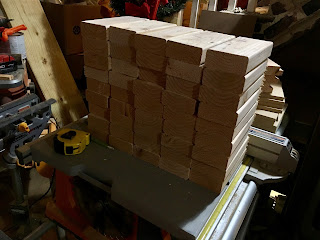 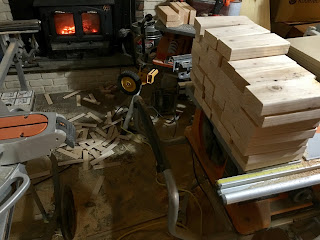 I then cut 1/4" off the side of each block to square them up. The scrap makes for good fire starter. 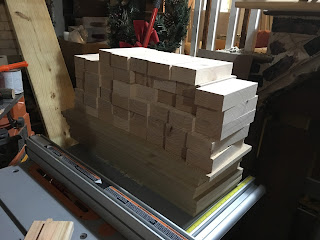 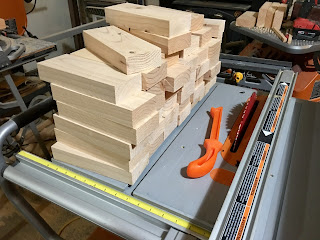 Once the sides were squared up it was time to cut them to height, I wanted them to be 1 1/4" high to account for the 1/2" notch and still have 3/4" of material to fasten to.  This whole thing could have been done using 3/4" pieces and fastening 1/2" thick strips to the top.  I'm not sure which method would have ended up being easier, one is more cutting, one is more assembly. 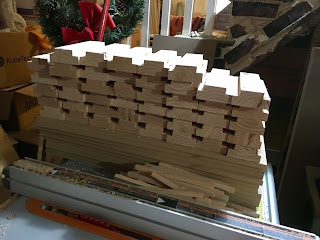 I ran each piece through the saw 4 times with the fence at 1/4" and the blade height at 1/4" to create a notch for the wheels. 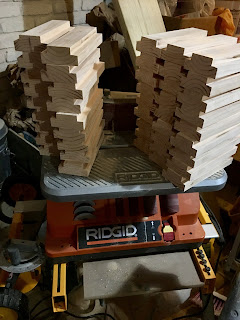 Now that all 360 cuts had been made, I then sanded each side, especially the ends. 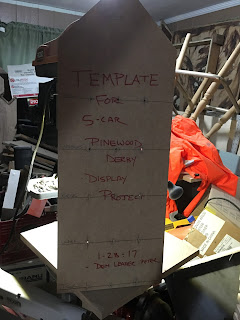 Now that I had all of the shelves cut I made up the template for the back panel.  There is a hole at the top to allow it to be mounted on the wall, there are 3 holes to attach each shelf, and the top corners were dog eared for aesthetics.  Once the template was made up I gang drilled the back panels on the drill press for the 144 holes. 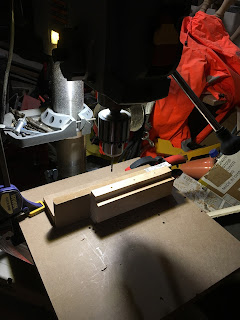 I made up and positioned a makeshift fence for the drill press to drill pilot holes in each shelf.  This will aid in lining everything up when the boys assemble them.  The fence kept the holes centered top to bottom on each shelf. 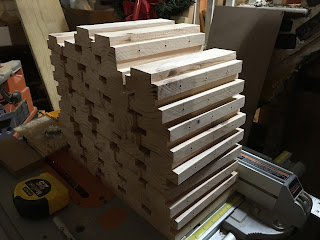 Once these 135 holes were drilled the parts were ready for hand sanding and painting. 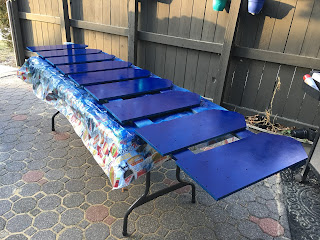 The back panels were painted first. 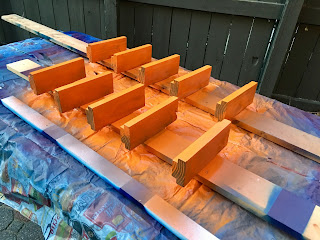 Then the bottom shelf (Tiger). 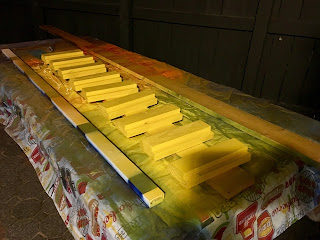 The next shelf (Wolf). 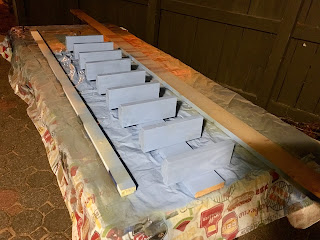 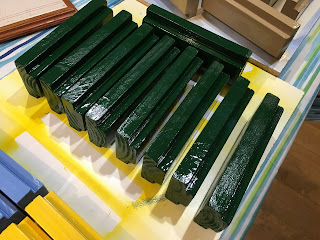 The WEBLOS shelf, I did it as the pants of the uniform, or if you do one shelf red it could be the green in the Weblos Colors. 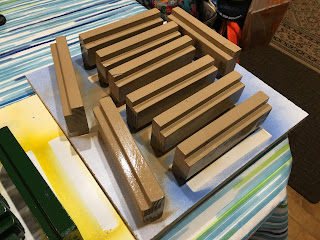 I did the AOL shelf in Khaki like the uniform shirt but you could make this the red shelf of you wanted to do the Weblos Colors. 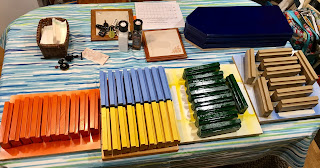 Everything painted and curing before assembly of the example. There are the screws we'll be using, they're long enough to grab but not so long that it takes the boys forever to install them.  They're a T-20 drive so I had to gather up all my universal screwdrivers and torx bits, but they'll be a lot less slippage than trying to use philips head screws, they also have a type 17 point so they'll go in easy, especially with the pilot holes I drilled already. 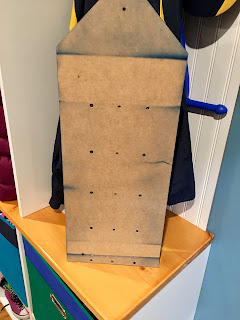 This is the back of the assembled unit with the screws installed, they recess into the MDF easily enough for a nice smooth back when it's done. 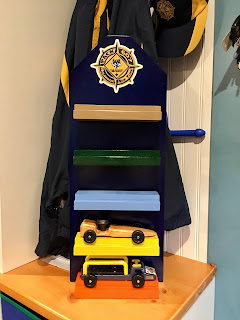 Here are some shots of it assembled with some of the cars that I've made on it.  The sticker of the pack crest I had printed by Sticker Mule in anticipation of doing this project.  The top point covers the hole I drilled for hanging it on the wall, but you can easily poke a screw through the sticker if you want to mount it. 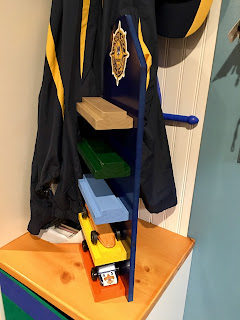 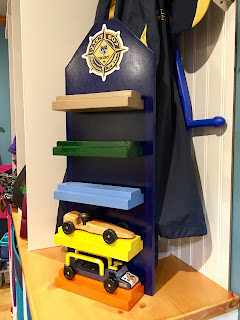 Posted by Scoutmaster Thomas at 9:30 AM